High Peak student Kitty Rooney is set to take up her place at Cambridge after being one of Withington Girls’ School’s top achievers in her A-Level examination results, making her the fifth in her immediate family to attend an Oxbridge university.
Despite having had to take time off School during Sixth Form following spinal surgery, Kitty – who was one of eight Withington girls to obtain a clean sweep of A*s – successfully secured the elite top grade in all her subjects (Geography, Biology and Maths), with her A-Level results contributing to the School’s impressive 29% of A*s achieved overall, and an A*-A pass rate of 74%.
The 18-year-old, from Chapel-en-le-Frith, will now go on to read Geography at Queens’ College Cambridge, following in the footsteps of her elder sister Eliza who also attended Cambridge after leaving WGS in 2013 to read Economics at Gonville and Caius College.  Kitty’s brother William, who attended the Manchester Grammar School, is currently in his second year at New College, Oxford, where he is reading Russian and Spanish, whilst her parents Heather and Paul – now a trustee of the Buxton Opera House – went to Oxford, where they met as undergraduates whilst studying at St Catherine’s College.
Already holding 11 A* grades in her GCSEs and an AS in Chemistry, and with her sights on a career as a weather presenter or a journalist, Kitty is amongst nine Withington girls – 13% of the cohort –  to have successfully secured a place at the universities of Oxford or Cambridge this year.
Having joined WGS in the Junior School, Kitty says she has thrived in the Withington environment, and praised “the tight community feel, close friendships made over the years and the warm and supportive relationships forged with teachers”.
Withington Girls’ School is celebrating yet another set of superb A-Level results, with 91% of all subjects passed at grades A*, A or B – and out of this year’s A-Level group of 69 girls, eight students achieved a clean sweep of A*s in all subjects taken and more than half of students achieved at least 3 A*- A grades. Headmistress, Mrs Sarah Haslam, said of the A-Level results: ‘It has been an absolute pleasure to work with this year group who have made such a fantastic contribution to the life of the school. They fully deserve these wonderful results which not only reflect their high academic ability, but also their commitment and their passion for learning. In this year’s context of A Level reform in particular, it is satisfying to see the girls’ and their teachers’ outstanding dedication rewarded in results that enable our girls to move on to the university courses of their choice, many the most competitive in the land, and to see them leave with the skills, values, personal and social qualities needed to embrace the opportunities and challenges ahead and to go where their ambitions and dreams take them.” 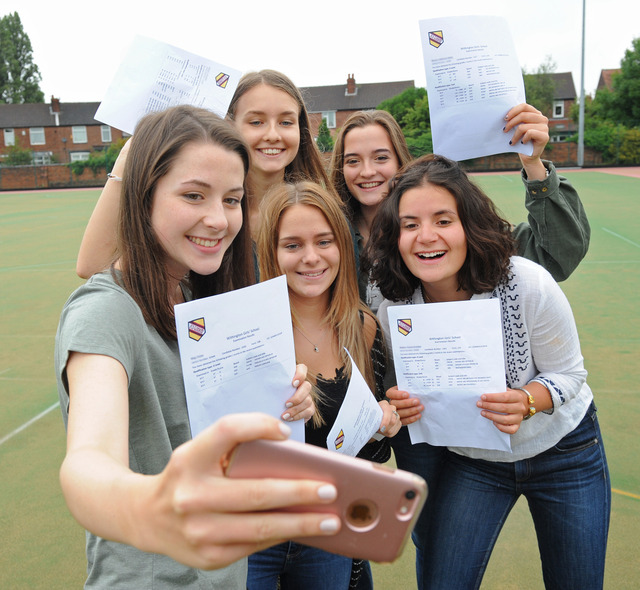