The Senior School Production is always one of the highlights of the School year at Manor House School, Bookham, It is an event which holds many special memories for both current and past pupils and staff.

This March, Manor House School have embraced the challenge of a demanding script and complicated song and dance routines to perform a more traditional piece of Musical Theatre in Lerner and Loewe’s ‘My Fair Lady’.  The script is adapted from George Bernard Shaw’s Play and Gabriel Pascal’s Motion Picture “Pygmalion” and is being performed over three nights to a packed house from Monday 19 March to Wednesday 21 March at 7.00pm.

Mrs Teresa Williams, Head of Drama who has produced and directed the performance said “The play has only recently become available again for school and amateur groups to perform and the cast has risen magnificently to the challenge.”

Elanor, in Year 9, plays Eliza Doolittle. Elanor says “I joined Manor House School in September 2017 and have enjoyed every second since. Before I came here, my main hobbies were Sport and Athletics and, although I really enjoyed Drama, I had never really performed on stage. I feel privileged and really excited to have been given this opportunity.”

Professor Higgins is played by Kathleen in Year 10, Alfred Doolittle by Verity in Year 9, Colonel Pickering by Candice and Mrs Pearce by Isabel, (both pupils also in Year 10).

Jessica, who is playing the part of Freddy, said “I enjoy studying Drama at GCSE and have also been involved with LAMDA lessons as a co-curricular activity for eight years. I have taken part in every Senior Production at Manor House. I was in the Chorus of ‘The Sound of Music’, a Ballet Girl in ‘Billy Elliott’ and Aretha in ‘We Will Rock You’.  I am looking forward to singing solo, which I have not done before.”

Mrs Higgins, one of the much loved characters of the musical is played by Cecily. “I love playing this character as she is exceptionally well spoken and smartly dressed.  Outside of school, I am part of ‘Theatre Box’ at the Epsom Playhouse, run by our choreographer, Adrian Edmeades, as are a number of the girls in our senior school.

The Year 10 GCSE Drama Group have been involved in the set painting and design with other girls taking on roles such as Stage Managers, Dressers and Stage Hands.  Senior pupils also take on the roles of Sound and Lighting, Make Up and Hair as well as playing in the Orchestra.

Manor House is a selective independent day school for girls aged 4-16 with a co-educational nursery. 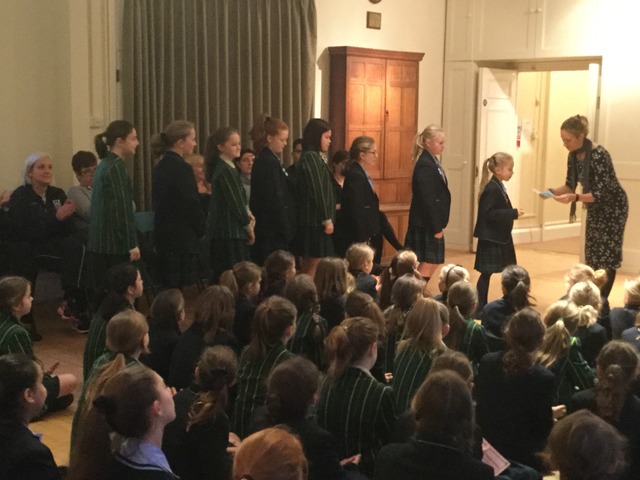