At a time when commentators have predicted that boys would outperform girls in the new A Level regime and said that there would be fewer top grades because of unconditional offers, St Augustine’s Priory Sixth Formers have shown that girls are strong, courageous and delighted to rise to tough challenges. St Augustine’s Priory Headteacher, Mrs Sarah Raffray, commented, “Our fantastic Sixth Formers and staff have shown that smart thinking, hard work and strategic decision making deliver excellent results and world class university destinations for individual girls. We have been undaunted by the reformed A Levels and are delighted that once again there are so many wonderful stories of personal bests. Our students are canny in the universities they choose and have shown that the new exam system should not be feared. Too many people have gloomily predicted that boys will outperform girls in the new A Levels because girls prefer coursework and don’t like so-called “terminal” exams. This is plainly nonsense. Girls are courageous and strong.”

The school’s percentage of A*s has increased by 4%. 40% of all grades (including EPQ) were A* to A while 50% of candidates achieved two grade As or above (including EPQ).  At EPQ alone over three quarters of the grades were A* or A. The EPQ (Extended Project Qualification) is the equivalent of an AS and is highly valued by all the top universities.  More and more universities are including EPQs in their offers to candidates.

Grade A*s and As were achieved in a wide range of subjects, including Biology, English Literature, Geography, Government and Politics, History, Mathematics, P.E., Sociology and Spanish.  100% of grades in History, Mathematics, English, Economics and Spanish were A* – B.  The results in AS Levels, which are now stand alone qualifications, were excellent with 100% A grades achieved in Further Maths and in Art. Grade A is the maximum grade available at AS.

In Year 11, out of 20 candidates for the Cambridge IGCSE History qualification, 14 girls achieved grades 9 and 8.  In addition, in Year 11 in the FSMQ Additional Maths qualification, which stands as a bridge between GCSE and A Level, 82% of candidates achieved the top grade of A.

These great results from St Augustine’s Priory demonstrate the strong impact of the teaching and learning environment at the school where teaching and individual support is delivered in small all-girls Sixth Form classes. 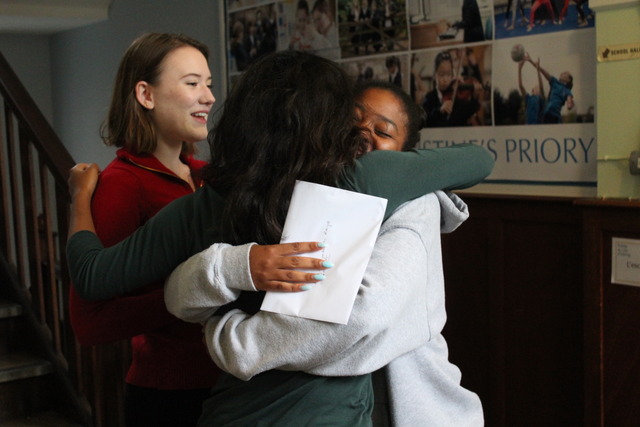