A York school girl has been highly commended by the Royal Geographical Society (RGS) in a national contest investigating the uniqueness of the Arctic. Isobel Wragg, a sixth form student at The Mount School York, was one of four pupils to be recognised by the RGS’s Young Geographer of the Year 2018 competition’s Key Stage 5 category for 16-18 year olds, in which there were over 1,150 competitors. She received her award at the RGS in London along with the top four entrants for Key Stages 2, 3 and 4 (ages 9-16 years old). The competition invited pupils to explore the geography of the Arctic, a dynamic environment that is undergoing change, asking them, “What makes the Arctic unique?” Entrants to the Key Stage 5 category were expected to write a 1,500 word essay while KS2, KS3 and KS4 students produced an A3 poster. Isobel, who joined The Mount in the Sixth Form after graduating with her GCSE’s from Ryedale School, was the only pupil in the entire competition from a Yorkshire school to win recognition. Other winning pupils came from schools in Buckinghamshire, Dorset, Essex, London, Lincolnshire, Northamptonshire, Oman, Oxfordshire and Surrey. Isobel, who had studied climate change in the Arctic in the lower sixth form as part of the curriculum, said of her award, “I’d been reading National Geographic’s online magazine over the Summer break and saw the competition. I felt very strongly that the paper must be my own work so I didn’t tell Mrs Cook (The Mount’s Head of Geography) about my entry until I’d already submitted it.” Carol Cook said, “I strongly encourage our A Level Geography students to join the Royal Geographical Society, read articles around the subject and enter competitions. The fact that Izzy took this initiative is a credit to her. Izzy is a born geographer; she is applying to read Geography at university and will be a significant asset wherever she goes to university and beyond.” “I’d probably not have actually gone through with entering the competition if not for The Mount’s ethos, which encourages each of us to live our lives. Once I got my head down, it was actually fun to do. If you’re reading this and you’re thinking of taking part in the 2019 competition, I would say, “Never underestimate your own abilities. Go for it,”” says Isobel. Isobel has well-informed views on the importance of polar environments. “People think of the Arctic as being this vast, barren landscape. But it is actually incredibly rich in biodiversity, even at a micro level,” she says. “The indigenous people of the Arctic and the wildlife are each an intrinsic part of the landscape: when the landscape goes, so do they. Environmental protection of the Arctic is crucial, not just for them but for all of us, globally.” Michael Spiers, who heads The Mount’s Sixth Form, says, “Izzy’s accolade from the Royal Geographical Society is a phenomenal achievement, especially given the sheer number of people she was up against, well over a thousand. She has a compelling enthusiasm for Geography and, to be honest, if anyone can solve climate change, it’s her!” Adrienne Richmond, Principal of The Mount, said, “We are very proud of Izzy’s achievement and well-deserved recognition in a national competition. She showed commendable initiative in entering a competition on a subject that interests her. Her “can-do” attitude shows why Mount girls don’t just enjoy equal opportunities, but every opportunity. Our girls pursue subjects that interest them, free from the pressure of gender stereotypes and, as Izzy has shown, we empower each girl with the confidence to believe in herself.” 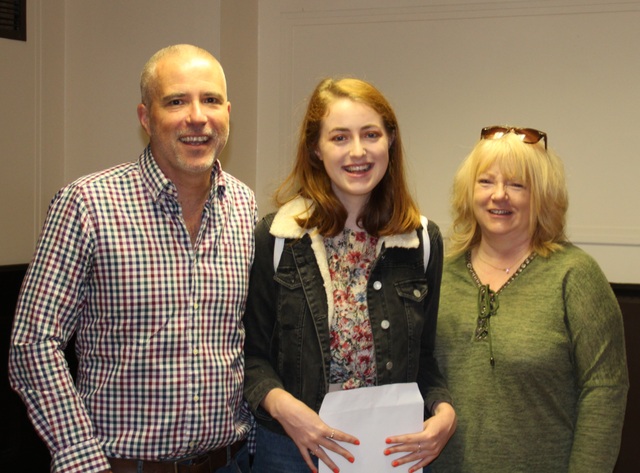