In a year that has seen an increase in the rigour of GCSEs and where the Department for Education had warned pupils, parents and teachers that few grade 9s, the new top mark in the numerical grading system for Mathematics and English, would be awarded, pupils at Manchester High School for Girls have certainly come out on top.

83% of all grades achieved by the students were A* to A, or in the 9 to 7 range for those subjects that reported results numerically.

95% of all grades were A* to B, or in the 9 to 6 category for subjects using the numerical grading system
Significantly, well over a third of results in both Mathematics (36%) and English Literature (35%) were grade 9, and 12 girls in the year group secured nothing less than an A*, or grade 8, in all of their subjects.

Head Mistress, Claire Hewitt, commented: “We knew the new GCSEs were going to be more demanding than ever and that a 9 would act as an additional grade to differentiate the most exceptional performance. A grade 9 is not the same as an A*; it is beyond the existing A* category and the fact that way over a third of all our girls secured this classification in Mathematics and English Literature is outstanding.

“That said, it is vital with the new numerical grades that pupils, parents, universities and future employers understand the system so that we don’t end up with demoralised students who put far too much pressure on themselves. Grades 7 and 8 are still broadly equivalent to an A or A* and it’s important we keep that in perspective.”

One of the best young mathematicians in the country

​Anoushka Mazumdar achieved full marks in her Further Maths examination, one of only nine students in the country to do so.

Almost half of the year group at Manchester High School for Girls opted to take Further Mathematics which is designed to take the study of Maths beyond the content of the GCSE Higher Tier. 100% of the cohort secured either an A* with distinction, an A* or an A.

Among them was Anoushka Mazumdar (16) from Cheadle who is one of only nine students across the country to achieve full marks in the examination, from an entry of over 19,000. Of her achievement Anoushka said: “I am over the moon! To not only have gained an A* with distinction in Further Maths but to have done so by making no mistakes is almost unbelievable.

“Seeing as I’m pretty good at it I think I’d better stick with Mathematics for A-level and will study it and Further Mathematics. I’m also going to take Physics, Chemistry and German as my dream is to become an engineer. I can’t wait to join the Sixth Form at Manchester High as the Sixth Form Centre here is really modern and doesn’t feel like a school at all. It’s going to be a great environment to study in but first I’ve going to go trampolining with friends to celebrate as I need to let off some steam!”

Identical twins Sophie and Victoria Xu-Tang (16) from Didsbury notched up 16 A*s, an A* with distinction and five 9 grades between them.

Victoria commented: “I am so thrilled with my exam results, they’re insane! I worked really hard in the run up to the exams and did lots of past papers but I never thought I’d achieve anything like this. I’m going to take Chemistry, Maths, Further Maths Physics and Art at A-level but have no idea what career path I’d like to follow. Thankfully, with these results my options are wide open.”

Sophie added: “Achieving three grade 9s in Mathematics, English Language and English Literature is a great feeling. Nobody knew how the new system was going to play out so it’s been a really nerve wracking wait.

“It’s fantastic that both my sister and I will progress into the Sixth Form at Manchester High together. I want to be a doctor so know there are many years of study ahead but my sister is always there to support me, willing me on.”

Foundations for the future

Head Mistress, Claire Hewitt, concluded: “In a year of real uncertainty, our girls have proved themselves to be determined and hardworking. They have been supported every step of the way by their passionate and dedicated teachers and we are all really proud of these results.

“It would be easy to simply pick out those students who have achieved the new grade 9 or an A* with distinction but our girls have secured fantastic results, across the board, in a wide range of subjects.

“GCSEs are all about laying the right foundations for future study and I am looking forward to welcoming the girls into our Sixth Form. They really do have a world of opportunity before them and our MHSG ‘Futures’ programme will be there to support them as they explore the many possible routes to success, weigh up university choices and consider potential careers.”

Manchester High welcomes external applications to join its Sixth Form. This is normally conditional upon students achieving at least a grade A, or 7, at GCSE in the subjects they wish to study, good passes in English and Mathematics and at least five GCSEs at grade 7 or above/A* or A grades.

Applicants studying Science and Additional Science at GCSE should note that grade 7 or above in Mathematics is required if they wish to study a Science subject at A-level.

The next Sixth Form Open Events are on Thursday 28th September and Monday 9th October. Visit www.manchesterhigh.co.uk for more details. 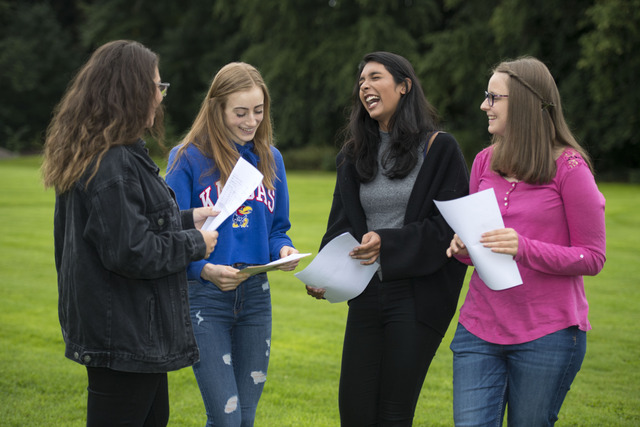