Pupils at King Edward VI High School for Girls are celebrating another set of phenomenal results with 92% grades at 9-7 (A*/A equivalent) a particularly impressive outcome in the year when reformed GCSEs and numerical grades were introduced for virtually all subjects. Remarkably, over 1 in 5 results was awarded a top grade ( i.e. Grade 9 or A*), 34 students out of 74 achieved at least eight top grades and 15 girls achieved top grades across the board.

Star pianist Lauren Zhang, 16, achieved all top grades even though she sat her first exam just 2 days after winning the BBC Young Musician of the Year competition in May and had had to juggle GCSE revision with around 4 hours of practice each day in the runup to the contest. Lauren is also one of the UK’s top young mathematicians and after excelling in the UK Maths Olympiad was invited to a prestigious Oxford University Maths Camp. She scored 7 Grade 9s and 3 A*s,

The A*s were in Physics, Geography and History.

“I was not expecting this at all,” Lauren gasped. “as my grades were a lot better than I was predicted. The teachers prepared us really well and school was really generous, organising it so I had 4 hours of extra piano practice in school each week during exam revision and giving me a lot of freedom. I had my first 3 exams the day after I appeared on BBC Breakfast Time in Manchester, talking about becoming Young Musician of the Year. I found that having revision to do stopped me getting nervous before the competition and kept me grounded after I won it. For me English was probably the most difficult GCSE as you don’t know what’s coming up so you have to revise so many different themes and memorise loads of different quotes. I have a close-knit group of friends and they were really kind and gave me a lot of help.”

“I wasn’t surprised she did so well, going to a school like KEHS,” smiled her mother Hui Li, an Econometrist at Birmingham University. “They always have very rigorous standards but they’re extremely thoughtful and supportive, which is great for girls like Lauren with so many interests and commitments.”

Dance star Emma Van Boolen, 16, won a coveted scholarship to the Royal Conservatoire of Scotland in Glasgow just three years after taking up ballet and also achieved 5 Grade 9s, 2 Grade 8s and 2 A*s at GCSE. Emma from Kings Heath in Birmingham was European Irish Dance Champion aged 10 but made such rapid progress when she took up ballet aged 13, becoming a Senior Associate of the Royal Ballet School, that she now hopes to make her career in a professional ballet company.

“I was thrilled to get these amazing grades when I’ve been working so hard on my ballet,” she smiled. KEHS has been incredibly supportive and my friends and all the teachers have been really pleased for me. I’ve enjoyed taking part in the Dance Productions at school as a relaxation from the ballet training. My parents are very proud but just a bit anxious about me going away to study at the age of 16. Ultimately I’d love to make it as a dancer in a professional company in Britain or abroad.”

Most of the KEHS team that won the National Rounders Championship in July were taking GCSEs this year and all passed their exams at Grades 7-9 plus A/A*s, among them, Jaya Patel who scored six Grade 9s, two Grade 8s and two A*s and Maddie Williams who achieved seven Grade 8s and 3 A*s

“It was a great relaxation to go out and whack a ball around and train as a team,” said Maddie. “You can’t be revising 24 hours a day and sport is a wonderful way to release the tension and get fit. Beating Bedford School in the final of the National Championships was a real thrill and something we’ll remember for the rest of our lives.”

Safaa Baig from Edgbaston achieved a full house of 7 Grade 9s and three A* grades and celebrated with her sister Salihah, 14 and mother Ruksana. A gifted sportswoman and keen Guide, Safaa plays for the BAI Netball Club and also enjoys Bollywood dance. She is fascinated by politics and is doing work experience at the International Trade Centre in Geneva.

Talented swimmer Maya Basra, also from Edgbaston achieved 6 Grade 9s and 3 A*s and celebrated with her mum, Nina, as did her three friends, musician and dancer Sanjana Sudeshkumar  (8 Grade 9s and 2 A*s plus a top grade in Additional Maths), Aamisah Butt (6 Grade 9s and 3 A*s) and Tara Desai from Halesowen who scored 8 Grade 9s and 2 A*s, to the delight of her brother Jules, 20, an Old Edwardian who is reading Physics and Philosophy at Merton College, Oxford.

“I am incredulous,” said Tara. “I think they’ve got me mixed up with someone else! I love this school as it’s about far more than just good exam results. I specially enjoy singing in the Chamber Choir and doing Theatre and musicals here – I’ve made some great friends and had amazing experiences. Both our parents are doctors but I hope to study Classics at university.”

Another drama enthusiast Sheneli Jayasuriya from Sutton Coldfield cried tears of joy as she discovered she had achieved 7 Grade 9s and 3 A*s. “ I was really surprised,” she gulped. “I worked really hard but you never know if you are going to get the grades you hope for. I love drama and the teamwork and fun of taking part in the productions here and I also enjoy fencing – which is good for fight scenes in historical plays!”

“I was not at all surprised,” smiled her proud mother, a GP. “Sheneli is very determined and she generally achieves anything she sets her mind to. This is the best school for her as it’s very friendly and great on the all-round development of its girls, not just their academic successes.”

“This school is really encouraging,” she explained. “People expect you to work hard and do well and we spur each other on but we all want one another to succeed, not just ourselves and there’s a really fun, friendly atmosphere.”

There was double joy for another Sutton Coldfield student, Rhea Takhar who gained 8 Grade 9s and 2 A*s just a week after her sister Raushan, 18, also a KEHS pupil, achieved a place to read Medicine at Bart’s Hospital. Rhea who recently took her Diploma in oboe plays in the school Symphony Orchestra and has also represented the West Midlands at hockey.

It was a similar story for Alissa Singhal who celebrated a full house of 8 Grade 9s, 2 A*s and a top grade in Additional Maths with her proud sister Natalie who last week achieved 3 A*s and an A at A level, ensuring her a place at Homerton College, Cambridge.

“I knew how hard it would be to get all top grades,” said a visibly relieved Alissa . “and this year was specially tough as we had no past papers to work from, so everyone was a bit unsure of how the results would go. I may try to study Law long term but I’m keeping my options open for now. Doing lots of exercise was what kept me calm as we had a major Dance production around the time of the exams so we kept dancing all the way through, which stopped us getting anxious and nervous.”

Principal Ann Clark said: ‘I am proud of all the pupils and staff who have worked so hard to achieve such excellent results in a year of unprecedented change. These results are a tribute to their strong work ethic, determination and tenacity in the face of brand new specifications. We have tried to manage parents’ and students’ expectations with the introduction of the new numerical grades, making it clear that the new Grade 9 will be awarded only in exceptional cases, while Grades 7-9 equate to the old A*/A grades.  We are very aware that employers are interested not merely in examination results, but in other skills such as teamwork, independence and resilience, skills which we aim to foster in all our students”.

Pupils at King Edward VI High School for Girls take 10 GCSEs with a strong academic core, including separate sciences, Mathematics, English and at least one Modern Foreign Language. Top results this year include 100% A* in Chinese, Japanese and Italian, 100% grades at 9-7 (A*/A) in Spanish and 91% 9-7 grades in French, extraordinary results, particularly in view of the worrying national decline in the number of British pupils taking Modern Foreign Languages. Students also excelled in creative subjects with 100% of the Art, Drama and Music exams receiving 9-7 grades. Results in the STEM subjects (Science, Technology, Engineering and Mathematics) were outstanding with 96% of the Mathematics exams awarded Grades 9-7, and 43 students out of 74 achieving the elusive Grade 9, while in the challenging Additional Mathematics examination, 77% were awarded the top grade.

“These Year 11 students are multi-talented,” added Ann Clark,  “from Lauren Zhang the winner of the BBC Young Musician of the Year competition, who also achieved top grades across the board, to members of the team that won the national rounders championship, and Emma Van Boolen awarded a ballet scholarship to the Royal Conservatoire of Scotland. All these girls, excelling in such a variety of different areas show that there is so much more to life than the new-style GCSE examinations.” 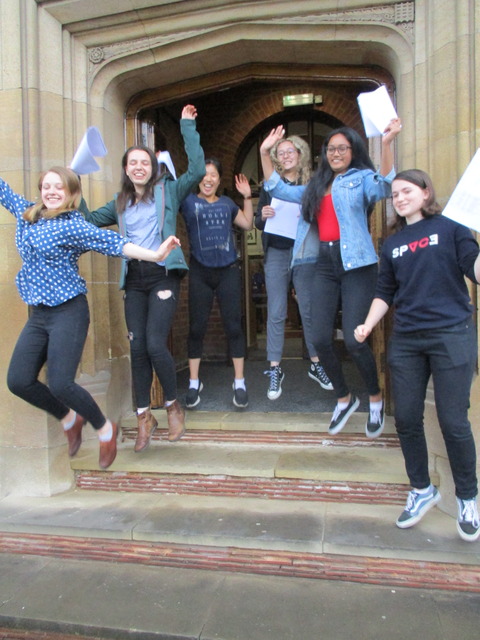 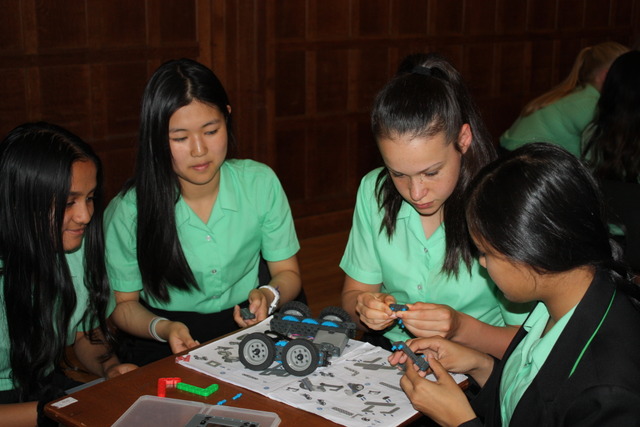 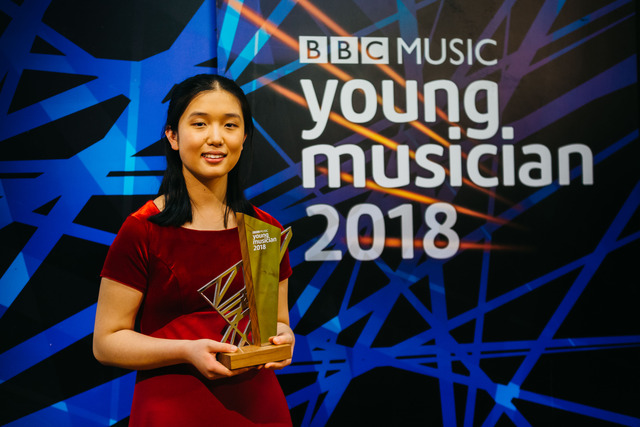 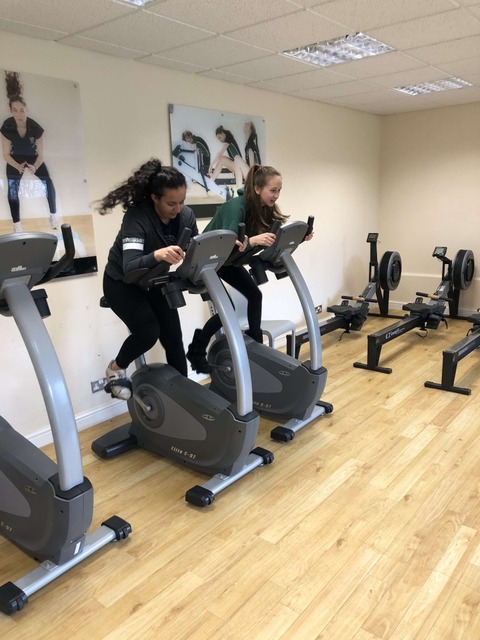