We welcomed back our recent year 13 leavers to congratulate them before they begin their journey into either higher education, employment and gap years.

Prizes, GCSE, AS and A Level Certificates were presented by our guest speaker, Rachel Parris (see below) to students from year 10 through to year 13. Students were recognised not only for their outstanding academic achievements but also for art, sport, music, science, technology, D of E and endeavour to name but a few.

Our Chairman of Governors, Mr Peter Fothergill opened the evening by welcoming all of our students, parents, fellow governors, staff and guests including Lord Lieutenant of Leicestershire, Lady Gretton JP, The Worshipful The Mayor of Charnwood, Councillor Pauline Ranson and her Consort Mr Trevor Ranson, the Chairman of Leicestershire County Council, Councillor Mrs Janice Richards and her consort, Mr Tony Richards. After Mr Fothergill had given an overview of the governance of Loughborough Endowed Schools, Chair of the LHS committee of governors, Mrs Mary Gershlick spoke about the caring community that the school is.

Headmistress, Mrs Byrom, followed with thanks to not only to the current staff, campus-wide but also to retiring staff, paying a special tribute to former Head of Food, Mrs Megan Reilly who taught at LHS for 33 years. We then heard from students and their experiences on the Classics trip to Sicily and also about the successes of our Teen Tech teams.

Throughout the evening, excellent musical entertainment was provided by the LHS String Quartet with Libertango (Astor Piazzola) and the LHS Cantilena choir singing Here in my Heart (Sarah Quartel).

To round off such a memorable evening, our Head Girl, Rosie, gave a very humorous vote of thanks to our speaker before we finished, as is traditional, with our school hymn.

This year we were delighted to welcome back former LHS student, Rachel Parris, as our speaker for the evening. Multi-talented Rachel is an award-winning musical comedian, actress and improviser.

After leaving LHS in 2002, she studied Music at Oxford University before going on to train at Royal Central School of Speech and Drama. Rachel revealed she was never mischievous at school or ever the class clown, told us that after leaving university, she didn’t have any aspirations to become a comedian, but her career led her down that path and she discovered that she absolutely loved it!

She has since gone on to perform with The Comedy Store Players, The Oxford Imps, The Beau Zeaux, Scenes From Communal Living and The Bishop, as well as guesting with Grand Theft Impro and at The PIT and the Magnet in New York. She has appeared on Channel 4’s The IT Crowd and in BBC Three’s Murder in Successville, and presented Thronecast on Sky Atlantic. She also hosts the popular Throneroom podcast.

Her songs have been played on BBC Radio 4 and BBC 6 Music, and she has enjoyed three highly successful solo Edinburgh runs. Rachel was named The Independent’s One To Watch 2014, and was nominated for a Chortle award. She is also currently on a UK tour with the award-winning improv group, Austentatious, which is an entirely improvised comedy play in the style of Jane Austen.

She has recently returned from Edinburgh Fringe with her successful solo show ‘Keynote’. Ironically the inspiration for her show was derived from being asked to return to her old school to speak at Prize Giving! Through stand-up, character and musical comedy, she explored what messed up message she could possibly offer to impressionable young minds.

At the real prize giving event, Rachel’s speech was extremely funny as she entertained us with extracts from her show, and even performed a motivational song ‘You’ll be Fine’ with a mash-up of a slightly different version of the school hymn! Definitely a first for prize giving! However, despite the hilarity, Rachel’s underlying message to the students, especially those going off to university, was a wise one. Qualified from her own experience, she reassured them that following your dreams is not always necessarily the right path for everybody and they shouldn’t stick to them rigidly, there is more to discover in the world, so explore other options as you never know where it might lead you……

Featured picture: Rachel Parris, Mrs Byrom and some of the recipients of the T.H. Simpson Trophy for excellent work in year 11 (achieving 9 A* grades or more at GCSE) 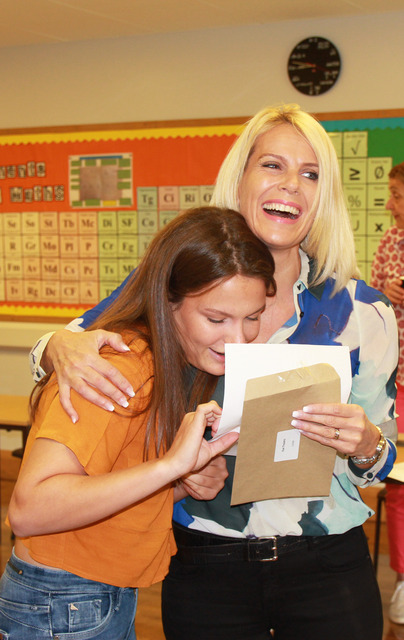 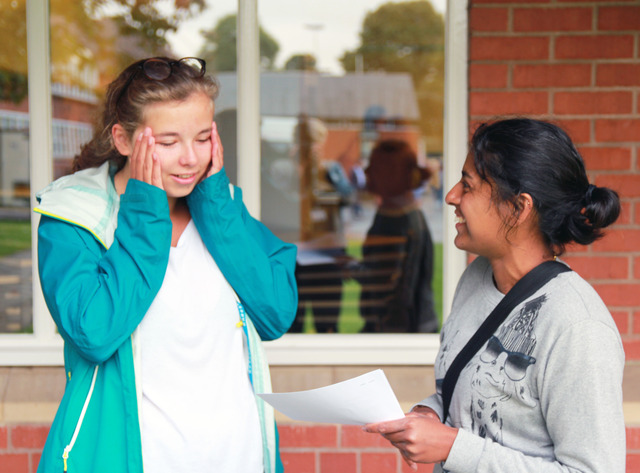